So this is my third Supra and I expect will be my last.

I bought my first MKIV Supra back in 2006. It started off as a black JDM NA 5spd and I enjoyed it for many years. I never expected to sell it and it was meant to be the car I took out every second Sunday when I transitioned into a grumpy old man. A rather unfortunate incident on a wet road ended those plans in 2011 and the car sadly was no longer.

Here is the old members ride thread for that car: 'All new' Iwantablackrz's '93 BMW...

I then purchased a white 1997 JDM RZ-S 6spd. It was a beautiful low mileage (sub 50k mile) car with all the factory fruit that I purchased from the original owner in Japan. It was a transition year for the Supra in Japan and at the time, it was considered one of the best model variants. It got all the Series 2 visual updates like the dash, headlights and tail lights but it kept all the good stuff from the series 1. Namely, the V160 and the larger B-series diff. Being in the transition year it was non-vvti which back in 2011 meant more options with tuners and compatible ECU's.

With the help of some friends we swapped a lot of parts over from my old Supra into the '97. We ended up with 270rwkw (380rwhp'ish) on the factory twins with a pretty slick dual intake set up. It was the envy of many but it never really felt like 'my' car somehow. There's just something about that first love I suppose.

I owned that car for 3 years and after driving less than 9,000 miles I decided that it was not wise to have so much of my net worth (at the time) tied up in a depreciating asset. If only I knew! When I sold the car I always told myself I would get another but for a long time the timing just wasn't right.

Well, after seven years I've been able to improve my situation where I can get back into a Supra guilt free. Unfortunately this coincided with a global pandemic that has seen a real increase in the value of these cars. In Australia this was also magnified by your 25 year rule which saw a LOT of Australian cars sent state side. Once upon a time finding a Supra in Australia was a buyers market but things have changed. A lot of good cars (and bad ones) left our shores and the local demand outstripped the supply. It became very difficult to find a car with flippers and exporters snapping up cars as soon as they were posted. It became a race to get in first.

In October 2020 after many months searching (and values sky-rocketing) I found this one for what was considered a fair price. It's a 'black 93 NA 5spd just like my first car. Infact, it's an IDENTICAL spec being optioned with the factory LSD and ABS. I really like that. It's not the TT I would have hoped for but the market is so ruined here it's a little bit of 'take what you can get' and it being the same spec as my first car to me, makes up for that. I bought this sight-unseen from another state (travel restrictions prevented me from inspecting the car) and thankfully the car was ok. It's a 'reasonably' clean car but it does need some work. As a base to work from it's perfect.

So without waffling on further here is my Supra the first time I saw it at the transport depot. 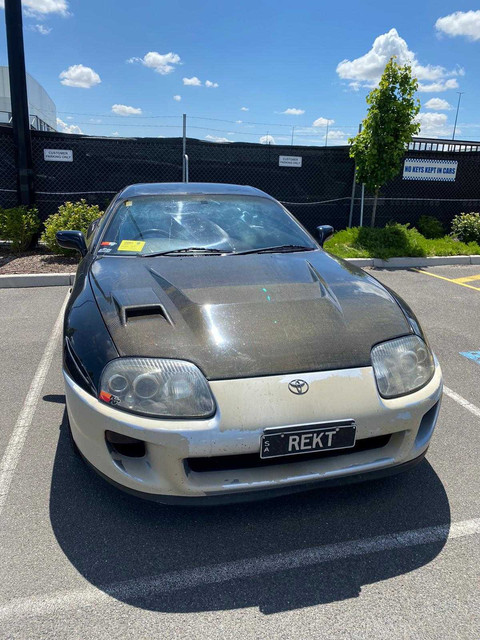 Yeah, eek I know. I do have the original bonnet which will be going back on the car once I manage to sell this one. No sign of front accident damage from what I can see.
The car did have an aftermarket front fender/bumper but when the owner bought a new (silver) turbo Supra he swapped bumpers. Goes without saying this will be repainted.

First thing it got was a good clean (inside and out). The car also had a few nasty stickers on the paintwork which have promptly been removed. The plates, hopefully not a bad omen, are also gone. 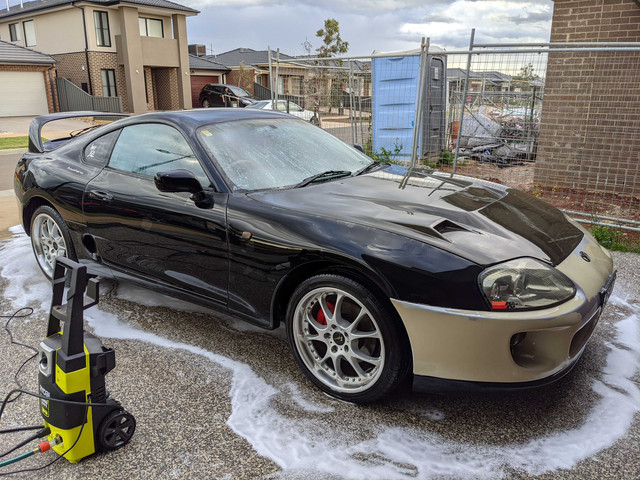 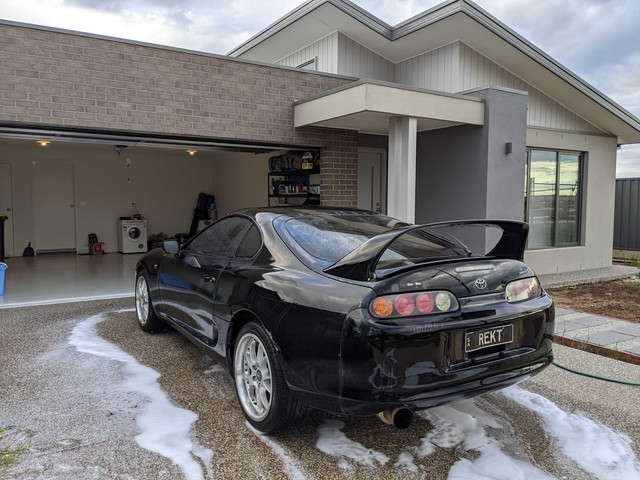 I haven't documented it much but the interior was largely removed and cleaned. I tidied up all the messy aftermarket audio wiring under the carpet, in the doors (removed most of it) and added new clips, caps, screws/bolts throughout. It's not a full restoration but short of the dash coming out everything else in the cabin has been removed and been tidied up. Black carpet and mats have made a significant improvement as the original grey carpet was horrid. 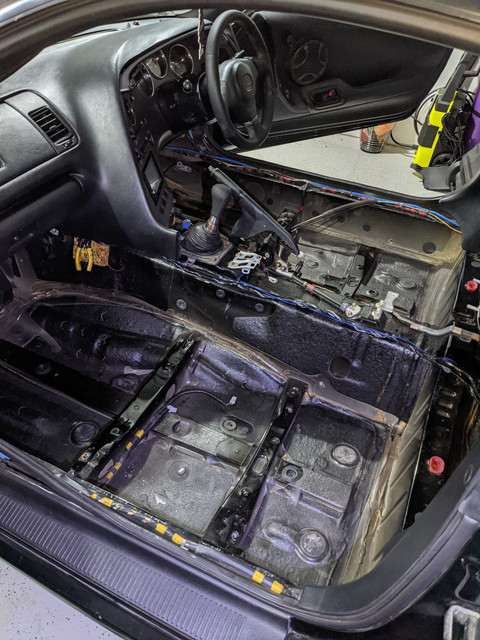 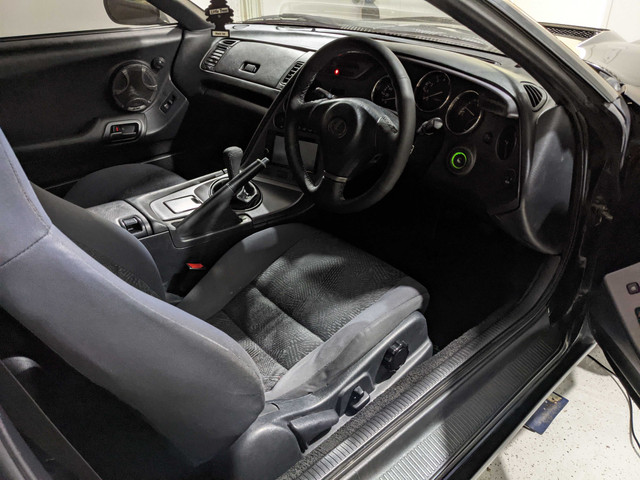 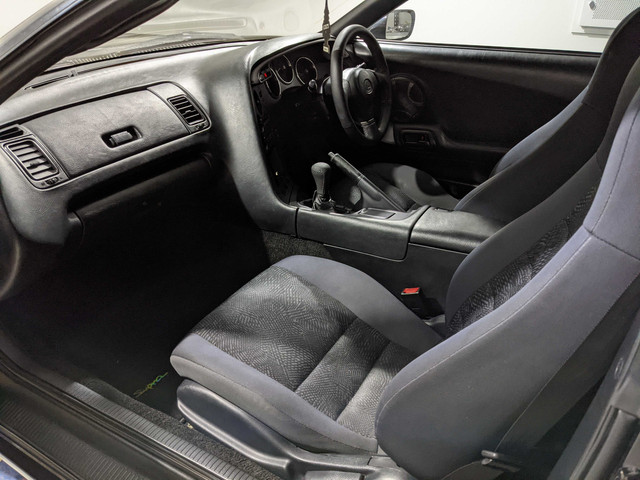 I hate how the cloth seats fade to a light purple. I'm hoping to either source some SR2/SR3 Recaro's OR have the original seats retrimmed in leather.

The worn series 1 Supra wheel was replaced with this retrimmed IS200 item. From what I can ascertain this is indistinguishable from the later model Supra tri-spoke wheel (excluding the center airbag cover). 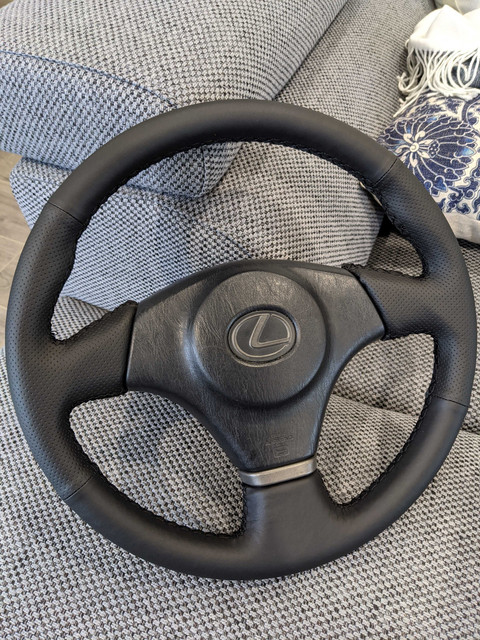 All the main contact points have been replaced with new. New OEM pedals, HVAC buttons, knobs etc. Not pictured but the dash lights have all been replaced with white LED's and the HVAC unit will get done eventually. The dash panels were in relatively good condition if it wasn't for it being covered in plastic dip. This has now been repainted in a subtle dusty satin grey metallic. It's the same colour that I painted the dash in my first Supra and I like the nostalgia. 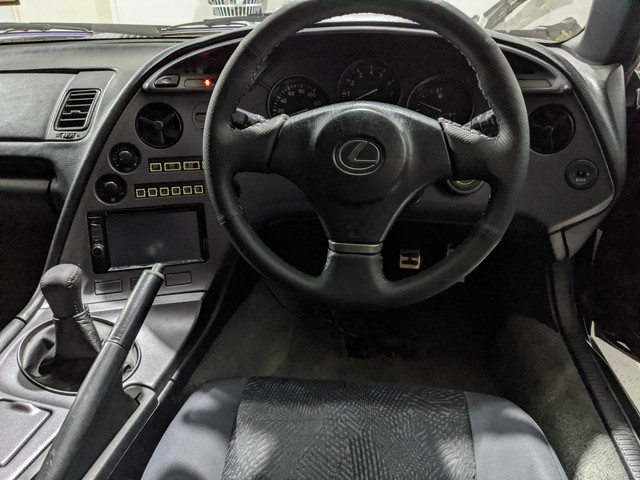 My focus is getting this to a 'clean NA' before I start on my T56 NA-T build idea. That means a lot of maintenance items first. I've already replaced a myriad of bushes and mounts under the car. Transmission mounts, new Whiteline Sway bars and new end links etc. Brakes and suspension are next on the list. I have already sourced the OG suspension set up, Bilstein shocks and Eibach springs. New larger calipers and slotted rotors are sitting in the garage. At the same time I will be re-tarring/coating the wheel wells and thoroughly cleaning (and possibly painting) everything else.

The engine bay I have largely left alone for now. I cleaned up some of the audio wiring and replaced all the ugly silicone hoses back to something a little more original. Nothing exciting to look at but it makes me happy for now. It's not the original engine but thankfully when they swapped in the replacement a few years back they did all the major service items. ...although I'm not 100% on the balancer so will be replacing that soon. 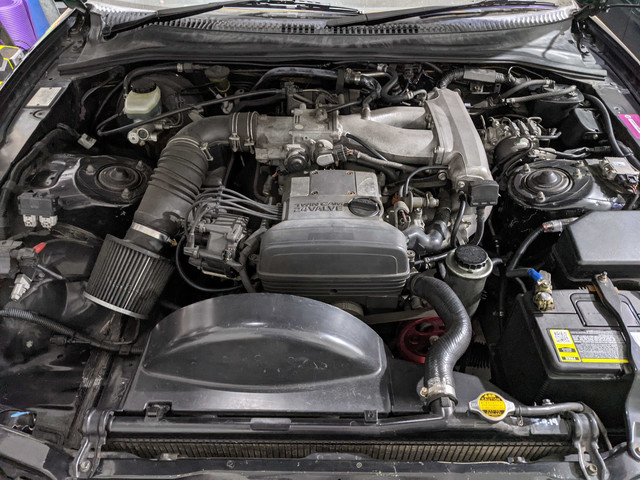 Car will be resprayed in a year or two. It will remain black I think. Visually I think I'll be aiming for a hybrid of my two cars. Factory wing and my favourite, a HKS/TiTek front lip. 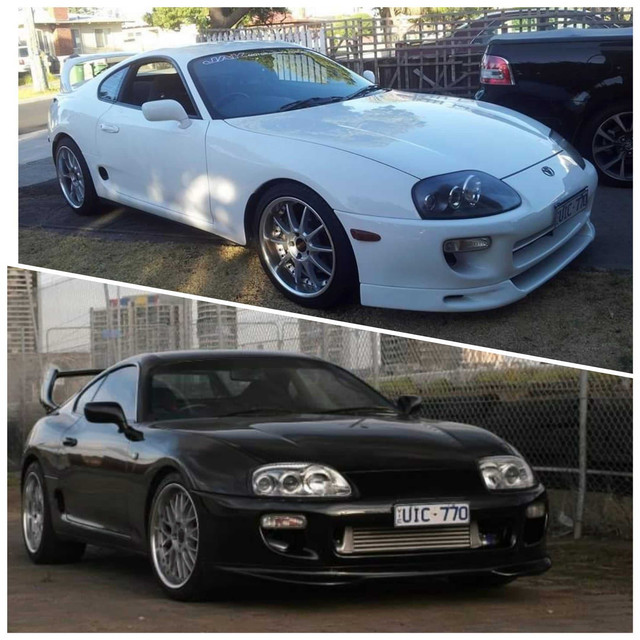 This is how the car sits today. Yes, complete with the bonnet sitting on the roof. 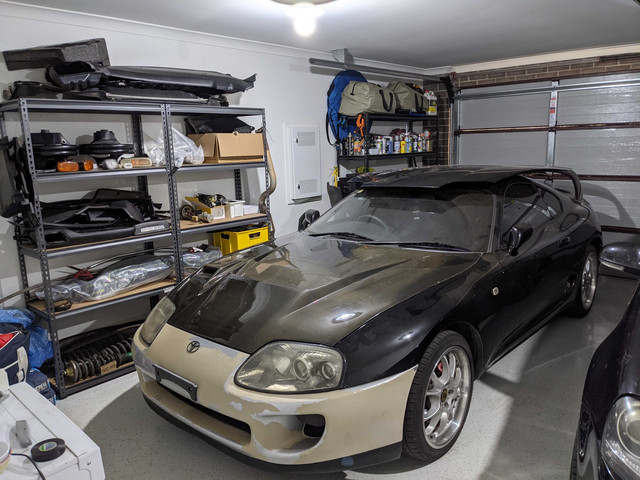 I'm wanting to be a bit more hands-on than my previous cars so I'm currently working my way around the car repairing various scratches and scrapes. I'm not a panel beater but it's amazing what you can learn from YouTube.
The whole car will be getting stripped back and repainted in a few years (after all the performance stuff) but figured I might aswell make it look presentable in the interim and I've been really impressed with what I've been able to achieve thus far. It might not be perfect but it's significantly better than nothing and it is temporary anyway. I'm really enjoying the process.

If you made it to the end I'm grateful. Thankyou.
L

Joined May 17, 2004
·
202 Posts
Bit of an update. Nothing huge, just chipping away at a long list of to-do's. Front bar has been resprayed which expectantly looks 100x better than the primer. I've fitted a Whifbitz 'style' poly lip. This is a bit of a temporary measure as I really want a HKS/Titek lip like my first car. My first lip was a genuine HKS one and unfortunately they're now discontinued so I'll probably go down the Titek route. It will feel wrong to then paint C/F though.
OEM bonnet has been installed and the Seibon one the car came with is GONE!

New hatch rubbers installed and I also fitted the euro front number plate bracket (not pictured) which looks a little tidier than the JDM variant. Gave the whole thing a polish, it's far from perfect as I'm no pro-detailer but it removed the chalky haze it had on some of the panels and came up pretty nice.

I've swapped out the crusty stone pitted S1 front indicators to the fresh ones I had from my old Supra. Eventually I'll swap them out for some clear ones but it's an improvement. . 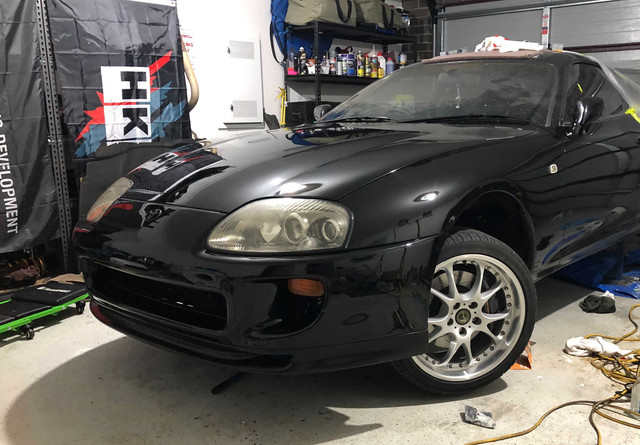 Quick before and after of my front wheel wells (don't worry, brake lines are now connected. Ha!). Really happy with how they came out.
Bilsteins, Eibach springs and KYB boots/dust covers. New OEM LS400 calipers, EBC red pads, DBA T3 rotors and Goodridge brake lines.
Would love to one day drop the subframe and really clean it up but it's not a job for now. 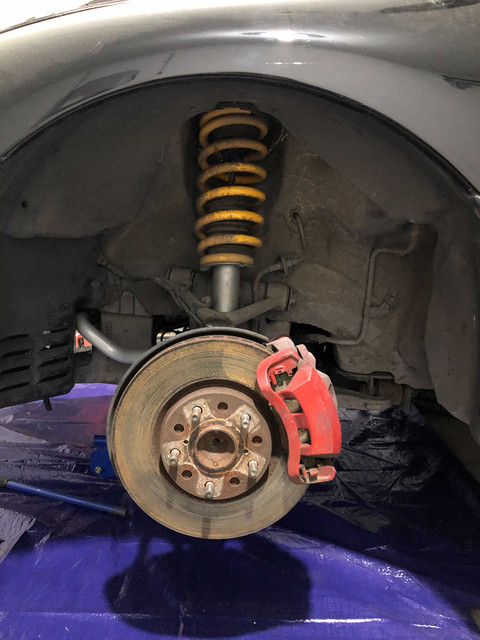 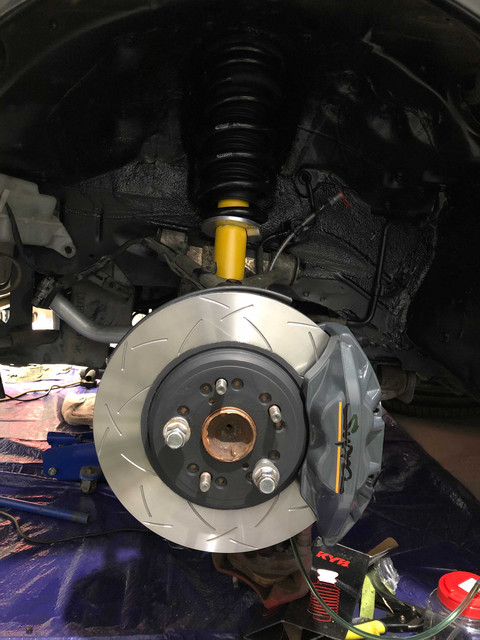 I also used a 'trim' paint for the cowl and was super impressed with how it came out. Time will tell how it holds up but given the car is living in a garage and not a daily I expect it'll last for a long time. 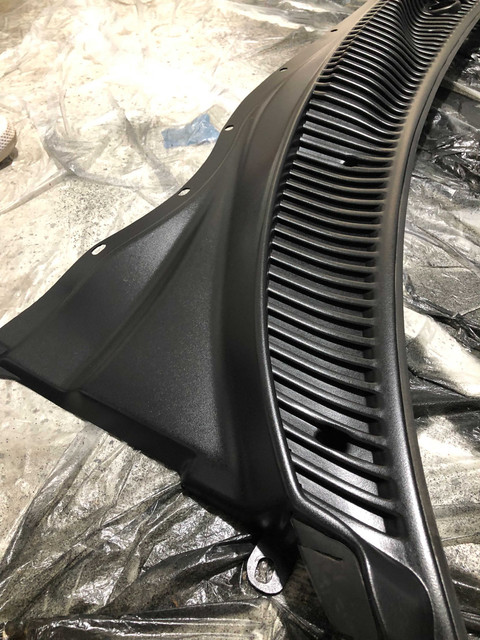 ...and finally, my super impressive engine bay. It took me a while to find a factory airbox from a seller that wasn't asking drug money. I could have left the pod filter on it but it just felt so ghetto. It'll have a massive pod filter when I go NA-T but I really wanted a stock base to start from. I also fitted one of those radiator diversion panels which boasts of greater cooling but in reality offers nothing more than making things look a little tidier.


I also painted my timing belt cover the same colour as my dash. It's identical to my first Supra although it wore a silver Supra decal and this time I went with a more subtle black one.

That's pretty much it for now. It's still on jack stands and there's a few more odds and ends but hopefully it'll be on the road soon to enjoy (our southern hemisphere) summer.

On a side note, I think I've driven this car less than 20km (12 miles) since I bought it over a year ago but I'm seriously falling in love with the thing.
1 - 4 of 4 Posts
Join the discussion
Continue with Facebook
Continue with Google
or sign up with email
About this Discussion
3 Replies
3 Participants
Last post:
iwantablackRZ 8 d ago
Supra Forums
Supra Forums is the largest online Toyota Supra MKI, MKII, MKIII, MKIV and MKV owner's club community. Discuss DIY, modifications, and upgrades.
Full Forum Listing
Explore Our Forums
MKIII (1986.5-1992) MKIV (1993-1998) Other Cars Members Rides General Supra Forum
Recommended Communities