NEVER ship with private couriers when posting outside of the country

Joined Dec 13, 2008
·
2,470 Posts
I've had countless issues with forum members refusing to ship to me here in Canada (for example) because there is simply a border in between. Turns out they have had previous problems with non-US members returning their packages once they received it. Here is why:

PROBLEM: Private companies, like UPS or Fedex, etc., will absolutely rape the receiver with border fees. For example a $130+ package value with tax, currency exchange rates and border fees in total have often cost $75+ at my door, regardless if I had paid for shipping or not. There is no warning or given formula to use to determine this surprise fee in advanced. Out of this forum and others I have been nailed with this fee 100% of the time by private companies only.

SOLUTION: Ship with your country's original postal service because it will be processed through the receiver's original postal service, as well as tracking information converted to the new courier's web site when it crosses the border with the same tracking #. This method can save the receiver from paying 20-45% more when it arrives at the door. Instead of being nailed 100% of the time, this method have only charged me with border fees about ~20% of the time, but will never cost nearly as much as a private courier!

For example: From the US, ship with USPS only. Because USPS does not own any property outside of the US, item will be converted to the receiving country's original postal service and somehow border fees will be more old fashioned and relaxed.

From Canada, ship with Canada Post only. Again, because CP is the country's original postal service, it does not have any property outside of Canada, because it is not a international business.

Me in Canada receiving package via UPS: With no given notice in advance, my border fee will have to be paid at my door by credit card. What if you don't have one? They no longer accept cash as of 4 years ago. So package will then be transferred to their nearest warehouse for me to pick up within operating hours to pay in cash. Their locations are never near by. Never.

Receiving via Fedex: Same procedure as UPS only I have to call or email them directly to repeat the same exact information that is on the label created by the shipper. Don't ask me why, but it takes 15 minutes out of my time.

As for over seas, I've shipped an item through UPS once and the receiver had complained about a border fee as well, probably for the exact same problem.

NOTES: - big-time ebay sellers are forced to deal with UPS or other private couriers because they are often contracted with one.

- keep the package value down. Don't jack up the package value in hopes of flipping a profit if it happens to vanish. The foreign receiver will have to pay that in tax in their currency after exchange rate and would probably take it out in your feedback review if they happen to notice.
► Show Full Signature

Joined Jun 13, 2008
·
1,356 Posts
Good tip. As someone who is currently buying lots of parts out of the states I'm dealing with this now lots. Whenever possible I ask people to ship USPS because I get fucked HARD by ups and I currently have a $100 on my counter for FedEx that im debating fighting. It's absolute bullshit. Good news is FedEx was dumb enough to drop off the package and bill later so I'm hoping I'll be able to haggle with them. UPS won't give you anything to you pay their fees however ridiculous they are, they basically blackmail you.
► Show Full Signature

Joined Dec 13, 2008
·
2,470 Posts
Try and offer the head honcho like $50 instead. I believe they do deal with a procedure that does cost them down time, but I believe that price is not nearly as much as it is advertised to be, considering its much cheaper for local couriers to do the same job. In my opinion this sounds like something out of a bid-rigging scheme between these private providers.

I have yet to complete a Fedex procedure but I am currently waiting on a item now that has been shipped through Fedex after requesting shipping via USPS. It sounds like they are just like UPS in terms of border fees yet a little laid back because they can drop you the package, yet annoying because you have to call or email them to repeat the label information.
► Show Full Signature

Joined May 2, 2005
·
531 Posts
I personaly only get members from the states to Use USPS or fedex. UPS just rips you off with duty and handling fees. However I find fedex good to deal with so long as the seller writes down a low value that I ask for. I sometimes don't get any fees at all from them but when I do its only like 10$ or so more than USPS/canada post and It doesnt linger at customs for a week or 2.

Joined Dec 13, 2008
·
2,470 Posts
I've never received from them, but I will see on Friday how they handle a $100 package. That must have been a busy time at your border, I don't think I've had that experience yet. I remember UPS was charging me $36 more for a large shipping cylinder of window trim than CP's price for a US member. I've simply never used them after discovering that price difference.

Joined Jan 3, 2016
·
215 Posts
The only problem with USPS is the weight and size limit. A set of coilovers at around 65lbs is probably the max from what I recall....

when I ran a ecomm business years ago, we had to deal with this everyday. Canadian customers would complain about border/duty fees if we shipped with UPS. Fedex bills the receiver after, the fees come back to us if the receiver didn't pay. not sure if that's the case now.
► Show Full Signature
1995 Supra 6spd TT White
2007 997 GT3RS Pumpkin
2011 997.2 GT3 White
2008 430 Scuderia Rosso Corsa 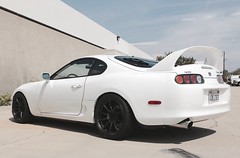 About the weight limit, it's almost a given that heavy items should be purchased either locally, or shipped to a mail box before the border (you can rent a mail box) and import it over the border yourself.

I personally don't have a passport but I know people who crosses the border often enough. It's a shame we would have to jump through these hoops because these private couriers have to take advantage.
► Show Full Signature