what did you do to your mk3 today

Toyota Supra Turbo 7M-GTE with R154 5-speed
Joined Oct 12, 2019
·
375 Posts
I drilled and tapped five holes for exhaust mounting brackets and boy are my arms tired tonight. My pilot hole was too small for the first two and it was a real chore. Once I figured that out, the remaining three went like a dream.

1989 Sport Roof White Pkg 7M-GTE
Joined Mar 1, 2007
·
132 Posts
Had a new A340 put in. It wouldn't go in reverse at all and upshifts and downshifts were sloppy. Sometimes it wouldn't go into overdrive unless I moved the selector to "2" and than back to "D." My uncle/mechanic said a replacement would be cheaper and take less time than a rebuild. I found one on eBay for $799 from a reputable seller. Picked it up yesterday. Acceleration is crisper, car will go in reverse and movement off the line is more immediate.

Joined Sep 13, 2002
·
270 Posts
(Yesterday) Changed my oil and filter for the 2nd time, 170 miles after my BHG repair, so I'm back to a normal schedule now. I went with Penzoil Euro L 5W30 this time, since I wanted something a bit thicker than Penz Platinum 5W30. My biggest complaint about regular Penz Platinum 5W30 is the cold/hot viscosity spread seemed too big. I'll see how I like it after I drive it more.

Asterix said:
(Yesterday) Changed my oil and filter for the 2nd time, 170 miles after my BHG repair, so I'm back to a normal schedule now. I went with Penzoil Euro L 5W30 this time, since I wanted something a bit thicker than Penz Platinum 5W30. My biggest complaint about regular Penz Platinum 5W30 is the cold/hot viscosity spread seemed too big. I'll see how I like it after I drive it more.
Click to expand...

Asterix said:
(Yesterday) Changed my oil and filter for the 2nd time, 170 miles after my BHG repair, so I'm back to a normal schedule now. I went with Penzoil Euro L 5W30 this time, since I wanted something a bit thicker than Penz Platinum 5W30. My biggest complaint about regular Penz Platinum 5W30 is the cold/hot viscosity spread seemed too big. I'll see how I like it after I drive it more.
Click to expand...

I may have posted this before, but just in case I didn't. I tried three times to order "conventional" oil on Amazon, and each time when it arrived it was synthetic. I went to AutoZone and looked and could not find any conventional oil. Then I saw the sale display and they had three 5 quart bottles of conventional Pennzoil 20-50, I think it was, for $10 a bottle. I questioned if this was right and the parts guy said yes, that all the manufactures were discontinuing conventional oil and going to synthetic (either blend or full) and that they were not even changing the sku.

I figure with my huge oil cooler that a change will take 7 quarts, so I bought all three bottles. This should do me for the initial fill and first change after some un-godly low number of miles. I haven't declared a break-in procedure yet, but I'm sure it will be low.

Anyway, no more conventional oil. I suspect that products labeled "break-in oil" will still be available for $40 a gallon.

1987 Toyota Supra
Joined Sep 28, 2005
·
640 Posts
Supertech oil has a number of conventional products, you can even get one with no detergents.

Lucas has a fairly inexpensive break in oil also.

Joined Jan 13, 2017
·
229 Posts
Gutted the interior and was greeted with rust. Really upset about it. Also, I have no welding experience or equipment.

Honestly, that rust doesn't look irreparable. I would hit it with a wire wheel to get the loose stuff off, get some Ospho or Eastwood Rust Converter, spray or brush that shit on, then coat it with primer until you can get a welder to fix some of the holes. It's not a perfect solution, but it'll stop it long enough till it can get fixed properly.
But still, that sucks man. 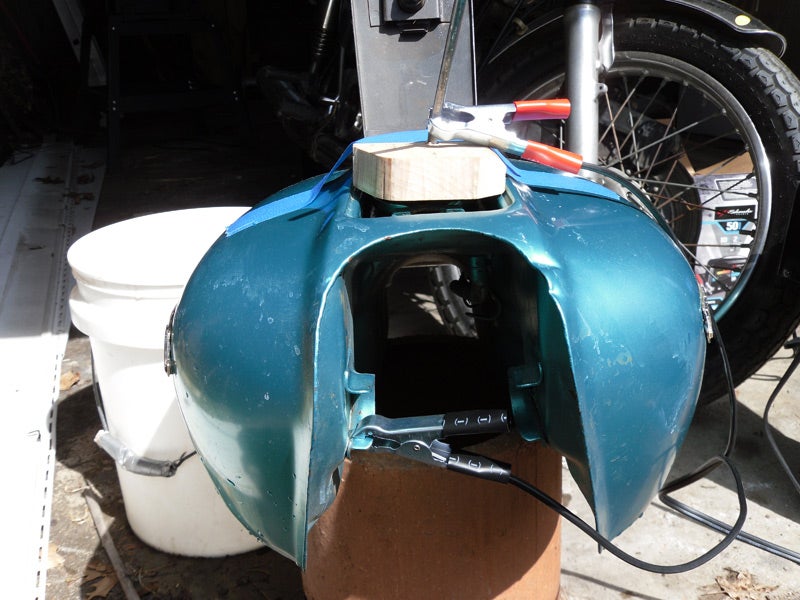 Electrolytic Rust Removal From a Motorcycle Gas Tank: The following is the process I used to remove rust from the inside of a motorcycle gas tank. All the information herein can be (and was) found on the internets. This was my first foray into electrolysis and I supplemented my newly gleaned...

Toyota Supra Turbo 7M-GTE with R154 5-speed
Joined Oct 12, 2019
·
375 Posts
Worked on routing my hardpipes for the turbo and intercooler which involved taking a bunch of stuff off to get to them. Did not get them sorted out yet, but make a little progress. Donated more blood to the cause in the process. Most everything that I removed needed to come off anyway, sooner or later. After all, this was a test install and the drive train comes out again. Have the TEMS motors on the bench to shorten the wires and re-pin them. Not sure whether I will get to the CPS to do that job, pins, seals and the clip courtesy of @Piratetip. My ECU is ordered and will still take a couple of weeks to get here. There is a product reveal on YouTube at 3 PM PDT today. The URL is as follows:

Routed the wire for the speed sensor to the trans tail-shaft and lightly bolted for now. Trying to figure out where to pull my LSU4.9 O2 sensor's wire through the tunnel to get to a good mounting place in the console. Searched the garage for my fan controller which I can't find for the life of me. Thought I knew what it looked like, but found the adjustment module for the bass off my amplifier. Took off the 90 degree -AN fittings from the DM oil relocation plate... not sure what's going to work there, but I do finally have the lower hardpipes mounted off the turbo. Still do not have both Raspberry Pi operating flawlessly on 13.6 volts... I think it's the wiring, as when I switch the connections the problem goes with the wires. This has been on-going for a while now. Saving for another day. Can't think of anything else. Time to go eat and settle back for the Speeduino reveal.

Have a great day!
David

Toyota Supra Turbo 7M-GTE with R154 5-speed
Joined Oct 12, 2019
·
375 Posts
I moved this rambling account of what I did today, Sunday, to my build thread. Spent 5 hours at the garage and worked on my paper list of things to do.

Hope you had a great day, too.

Joined 4 mo ago
·
99 Posts
Today, flush and filled the radiator and cleaned out the expansion tank.
S

Joined 4 mo ago
·
99 Posts
Today, flush and filled the radiator and cleaned out the expansion tank.

Toyota Supra Turbo 7M-GTE with R154 5-speed
Joined Oct 12, 2019
·
375 Posts
Read in a 15 year old thread here that the Camry windshield washer nozzles worked on our cars, so I bought a set using that part number. They don't fit my carbon fiber hood so another 11 bucks down the Supra drain

Wiring in that area is definitely confusing. I have eliminated the two relays under the fuse box because I am not using the functionality they supported (A/C condenser fan and A/C magnetic clutch). This eliminates the need for the round yellow plug coming off the engine harness to the relay.

Up until now, I thought this was a power lead and that the white plug was were I would get 12 volts for my Hitachi R35 coils. Now it looks like I have something additional to cut off from my Tweak'd harness.

The round black plug coming off the body harness next to the fuse box is for the alternator. The wires had some half-assed heat shrink and broken plastic cover on them. I'm definitely going to clean them up. It appears that this is one of those connectors that the terminals are crimped to the wire and them pulled back into the plug.

I am having quite a time learning to de-pin connectors. I have another de-pinning tool set coming from Amazon, but not sure that's the solution. I think of eight connectors I'm dealing with, that they have four or five different mechanisms for holding the pins in place. I am trying to only de-pin and re-pin connectors and not use any pigtail components.

I have some brass crimp connectors coming from somewhere that are better than what you can get on Amazon. @figgie told me Amazon's were crap before I even asked... like he was reading my mind. I am temped to clean up the alternator plug and wires, cut it off way back down in the harness, heat shrink it properly and add some fire-resistant mesh, and use those crimps to re-attach it to the harness. Hate to do it, but de-pinning, as I said, is painful.

Identified two relays that I'm keeping, headlight washer and fuel pump. Still have to do the calculation on the one necessary for the coils, but at least now I have a place to mount it.

That's it for Tuesday. Hope you're having a great day, too.

There was a comparison video I saw somewhere that showed a side-by-side comparison and it flooded the screen. I still hope to find something that works; but I’m not going to cut my hood. I can see the damage now. It’s going to be scary enough drilling for hood pins. Probably premature putting the nozzles in now. The hood has to come off again two more times. If anybody has a part number that fits the early hood and has better jets, shoot me a number.

1987 Toyota Supra
Joined Sep 28, 2005
·
640 Posts
Maybe you can shave material off the nozzles to fit the hood instead of modifying the hood?
You would have to get creative probably to make new clips though, to hold it in.

Joined Sep 13, 2002
·
270 Posts
Since I looked recently, I found no replacement squirters for my pre-89 hood. I bought a used one off eBay, because (natch) they're discontinued. The hole is pretty small to shave down the new style squirters, but would be worth a try for $11.
6261 - 6280 of 6329 Posts
Join the discussion
Continue with Facebook
Continue with Google
or sign up with email
About this Discussion
6.3K Replies
803 Participants
Last post:
Chocolate Cowboy 1 h ago
Supra Forums
Supra Forums is the largest online Toyota Supra MKI, MKII, MKIII, MKIV and MKV owner's club community. Discuss DIY, modifications, and upgrades.
Full Forum Listing
Explore Our Forums
MKIII (1986.5-1992) MKIV (1993-1998) Other Cars Members Rides General Supra Forum
Recommended Communities